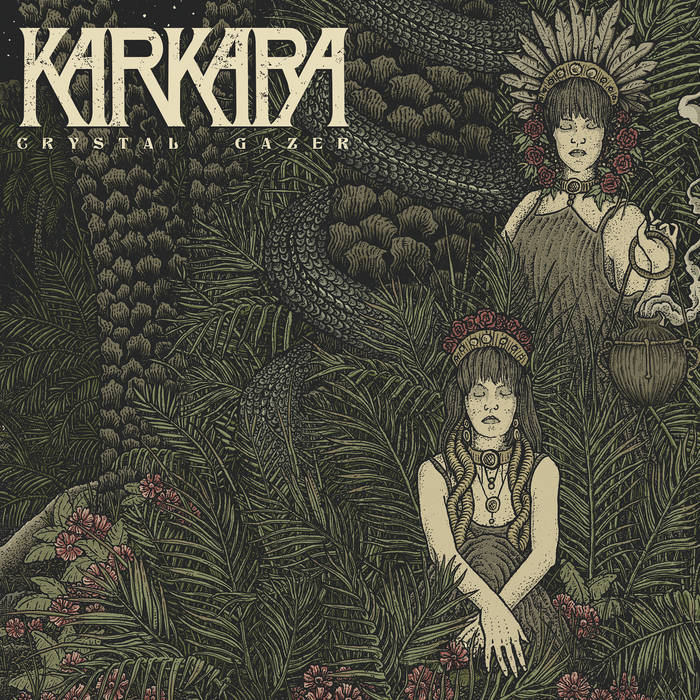 Karkara are an explosive power trio that furiously mixes garage / fuzz with middle eastern sounds, KARKARA is an unprecedented project that takes the gamble of glueing together the East and the West sound in a common goal: transcendence. Created in 2017 in Toulouse - France- under the idea of the guitarist and the bassist and inspired by the psychedelic rock scene of the Middle East and the Maghreb of the 60s and 70s, the band combines its traditi onal inspirati ons with a vicerale taste for the shatt ering sounds of garage fuzz and contem- porary krautrock.

Even going so far as to use their favourite atypical instrument - the didgeridoo - the three members of KARKARA, like desert wizards, take pleasure in pushing the boundaries of the genre further and take their audience into a mystical and indomitable world.

Their debut album «Crystal Gazer», recorded at Swampland studio and mastered by the American producer Jim Diamond, who had recorded and collaborated with the White Stripes in Detroit under Ghetto Records in the 90’s, is a hypnotic musical production inspired by the mystical folklores all around the middle eastern countries. With the collaboration of the illustrator Dead Flag who was an additional source of imagination, this 7 tracks LP of 41 minutes is a deafening psychedelic flood where the desert and the tribal atmosphere is omnipresent.The lyrics take the form of a mystical and narratives incantations that draw the thread of an epic journey that unfolds throughout all the album.

Featuring Oakland sounds from the Smart Bomb collective and Samplelov.